Remember this one ? Yes it’s the famous Norton Commander. I’ve been using it until we moved to Windows NT. A newer version was released that worked for Win96 and NT, but it looked a bit like they’ve had just dumped the NC in a “Window” 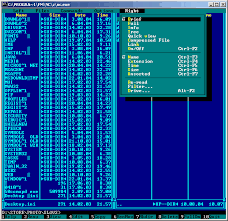 He once had left the Windows Commander on my machine, i gave it a try, and since then, it’s probably my most used application ever. In fact i do never use Windows Explorer, I rarely use WinZIP or WinRAR and I don’t need an FTP Client as well. Because…….. it’s all embedded in total commander.

Total commander is the 1st application i start in the morning and the last to be closed.

Since November 2002, Windows Commander was renamed in Total Commander.

You can run Total Commander in unregistered Mode, but you get annoying startup messages, so better you purchase a license. i have purchased Total commander somewhere in the late 90’s, and guess what, I never paid anything more and still get regular updates for free. you can find the tool here: http://www.ghisler.com/